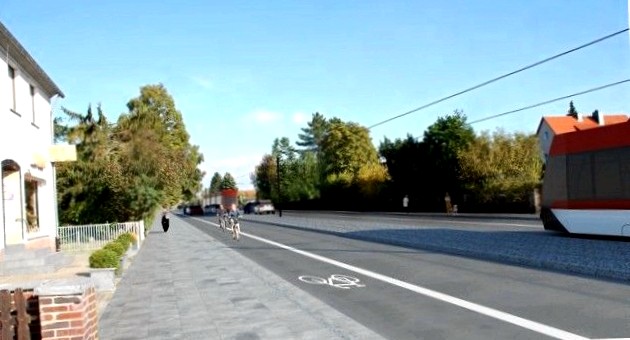 Many people in Volkmarode were caught cold by the route plans of the city administration. Because opposition to a rail line seemed successful in 2013. A citizens' initiative had formed against the construction of the line. A little later it was said: Trams are not worth it there. And now this: streetcar is well worth it. In Volkmarode, the construction of the track is even to begin.

This more than irritated many citizens. Finally, only recently there was a study based on the model of standardized assessment. It determines whether federal or state grants are to be expected. Important allowances. Because they drop construction costs by at least 50 percent and make a streetcar line affordable for a community in the first place.

To receive any subsidies at all, the cost-benefit ratio must be greater than a factor of 1. The first study for Volkmarode came to the result: clearly below the factor 1, only 0.22. No prospect of funding. The latest study: Factor 1.3 – fully eligible for funding.

Between the two studies lies a change in leadership at the helm of today's Verkehrs-GmbH. Jorg Reincke – unlike his predecessor Georg Hohmann – is considered a transportation expert with roots in the streetcar industry. As head of the streetcar division in Rostock, he was once instrumental in expanding the streetcar network there.

"We did it the way it's done!"He had said Monday in the city hall about the calculation methodology: cycles were recalculated to make streetcar driving more attractive in the whole city area. A reversing loop will be built at Querumer Strabe in Gliesmarode. More trains will then run up to the turning loop than today.

The plan there is not only to better connect the eastern ring area, but also to give passengers at Gliesmarode station a better connection to the city center. This will increase passenger numbers on the line. Added new passengers from Volkmarode-Nord.

The trams, however, will not run every 10 minutes as today, but then every 15 minutes. Thus the first plan. But Verkehrs-GmbH will change the frequency in any case, even if no new route is built. Because that is a central part of the new timetable.

At the same time, the construction administration wants to take the top off the protest in Volkmarode. Because previous plans called for: To accommodate the streetcar on Berliner Heerstrabe, more space is needed. Residents would have had to give up land. There was even fear of expropriation.

Today, the building authority prefers to talk about it: "We will perhaps still need areas in some places, but by no means to the extent that was once envisaged," says city building officer Heinz-Georg Leuer. There is nothing concrete, because the route has not yet been determined in detail.

And there's a bonus for residents, if the streetcar does come. Leuer: "Berliner Heerstrabe is dilapidated and must be renovated in any case. Regardless of whether the streetcar comes or not."This will not be something that can be done overnight, because the sewers will also have to be renewed. Civil engineering takes time.

The honorary city planners of MoveBS have already thought about how the Berliner Heerstrabe could look like with a tramway. MoveBS is of the opinion that the streets should not become wider and wider, but should remain as narrow as possible. Aerial photos of Volkmarode were therefore evaluated and the question was asked: What fits into Volkmarode at all??

Leonhard Prottel says: It is not necessary that the streetcar runs in both directions on its own track. It would need its own lane only where there is congestion – i.e. towards the city center. Out of town, the streetcar should run on the roadway.

This saves a lot of space and ensures that two bike lanes can now also be created, separated from the roadway by a solid line. Prottel says: "You can look at that on Leonhardstrasse."

Stops can be distributed intelligently: "And in such a way that no one has to wait behind streetcars. Because that is possible," says Prottel. But he also says: "That's just one way it could go through Volkmarode with the streetcar. This is only our proposal. We do not claim that this would actually be the best solution."